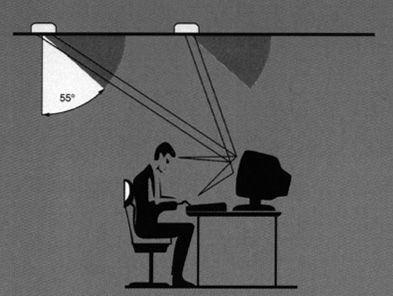 Angle of louvre cut off = 55 Degrees.

In this category, the calculated luminance of a luminaire above 55° elevation should not exceed 200cd/m at all angles of azimuth. This specification is intended for areas where there is a high density of screens and where terminal usage is sustained over long periods or is of an intensive nature. A typical example of where this specification may be required is a dealers room.

Angle of louvre cut off =65 Degrees.

In this category the limiting angle is 65° elevation above which the calculated luminaire should not exceed 200cd/m at all angles of azimuth. This category of luminaire should be used in areas where there is fairly widespread usage of VDT’s, maybe one per desk for general usage or a few terminals used continuously.

Angle of louvre cut off = 75 Degrees.

The specified limiting angle for this category is 75° above which the calculated luminance should not exceed 200cd/m at all angles of azimuth. These luminaires may be used in areas where the density of VDT’s in an area is relatively low and usage is casual.

In order to comply with the latest regulations relating to flame spread over the ceiling surface, the selection of diffusers for recessed luminaires, which form part of the ceiling, is very important.

n. angular distance, measured along horizon, of object from north or south points.

The SI unit of luminous intensity, equal to one lumen per steradian.