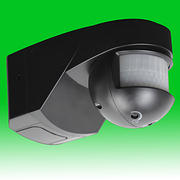 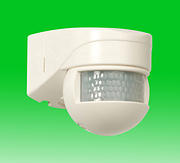 Description
Steinel
IS1 PIR Motion Detector
Targeted detection and attractive price. Infrared motion detector IS 1, for indoors and out, ideal for targeted coverage of small areas, 120° angle of coverage, reach up to 10 m, selectable time and twilight threshold, sensor turns through 30° and tilts through 180° for exact adjustment of the detection zone.

High-tech. Low energy.
Are you looking for an starter model? The IS 1 infrared motion detector comes with perfected technology in unadorned design. It is particularly reliable, can be mounted on the wall or ceiling and is the ideal solution for monitoring areas with precision targeting in front of buildings and on driveways. It also provides excellent quality of detection and can be tailored to the specific conditions on site. The detector is wired up so quickly and easily, there's enough time left for gardening. 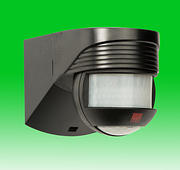 Passive Infra Red Movement Detector
senses the movement of body heat in detection zones,
and automatically switches on the light 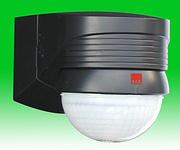 The detection area can be altered by blinds, which are included.
The blinds can be clipped-on and moved to stop unwanted detection, making it possible to achieve detection areas of less than 280°,
such as 90°, 130° or 230°. Blinds included, also for 360° anti-creep cover

MTLW3000 can be wired in parallel to enable any detector to turn ON all the load connected.
The load must not exceed the 3kw rating of a single unit.

Technical
Description
Steinel - PIR Sensors
Steinel have become one of Europe's foremost manufacturers of PIR sensors,
with an excellent reputation for quality and reliability,
backed up a comprehensive three year guarantee 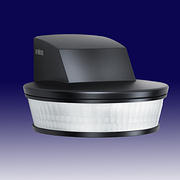 Description
Steinel
SensIQ S Evo PIR Black
The evolution of perfection.
The sensIQ S is just as perfect as its larger role model. For indoors and outdoors, ideal for building entrances, loading bays, for mounting heights of up to 5 m, quadruple sensor system for optimum surveillance over 3x100° coverage angle, 20 m reach (tangential), reach setting to the accuracy of a metre in 3 independent directions. Remote control and corner wall mount bracket included.

The evolution of perfection. The reference in compact design.
Handsome addition! The sensIQ S is just as perfect in form and functional diversity as its larger role model. A look that architects like. This designer motion detector was developed specifically for wall mounting though. Being altogether more compact that its big brother, the sensIQ S nestles up against the facade, perfectly harmonising with modern, purist architecture. Its inner values are spectacular too because it comes with the same highly intelligent features and setting options as the sensIQ.

Technical
Back to Top Proceed to checkout